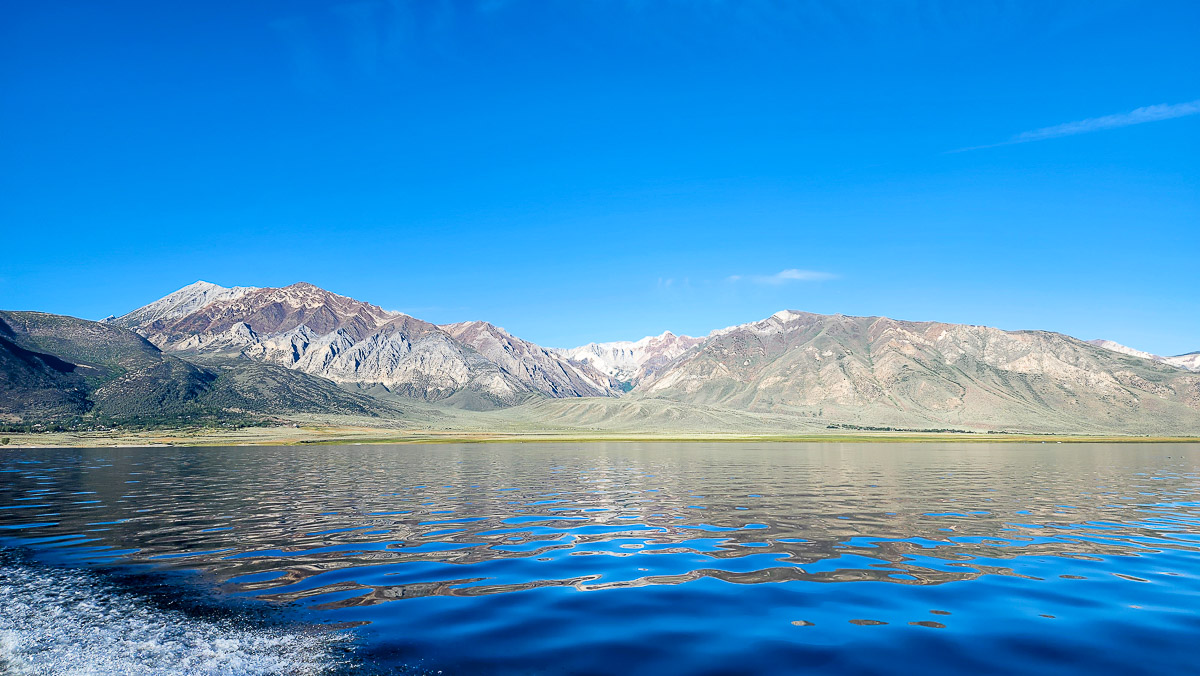 Warm summer weather is here, but diurnal south easterly winds are keeping things pleasant in the afternoons and evenings. Fishing on Crowley has been producing very prime quality trout, and most of the fish are hanging deep to escape the warmer surface temperatures. Annual insect and fish activities are looking delayed this year by a couple of weeks. The San Joaquin River is at a great flow for dry fly fishing and some eager wild trout are taking flies all over the river. Hot Creek is slowly coming around again with more fish back in the pools, and with the hoppers a little larger now they are taking hard looks at most dry fly patterns presented properly. The East Walker River has reached conditions that are not healthy for the resident trout. Warm water temperatures combined with low flows makes this area a place to avoid for the sake of the fish. Playing fish in any area (lake or stream) should be done quickly to avoid additional stress on the trout. The Upper Owens River hopper bite is starting to pick up, but the fish are not as plentiful in the river as in past years.

Crowley Lake’s damselflies are now making a better showing, and the weeds have grown tall in the shallows. We can expect to see the trout start to make their migration into shallower water soon, but for now they are holding deep in 30 plus feet. We are finding fish at various depths and you will see quite a few feeding on the surface throughout the day. Christmas Bay, Sandy Pt, Hilton, and portions of McGee have been the holding areas. Best patterns have been #16 -20 SD Chironomidge, #16 – 18 Puff O’ Smoke, Dark Assassin # 14 -16 in parallel and regular, #14 – 18 Mud Candy, #16 -18 Blood Midge, #16 -18 Copper Tiger Midge, #16 -18 Crystal Tiger Midge Long, #18 -20 Gillie Dark and Light, and Tungsten Zebra Midge # 16 – 20.

San Joaquin River flows are dropping quickly, but the window is great now for walking and throwing dry flies and small nymphs as dropper flies. Wild rainbows and browns are aggressively taking flies off the top. Not much pressure in this area this year and campgrounds seem to be not as full as prior years. The paved road in is a little bumpy in spots this year so take caution and keep your speed down. Gin clear water as usual will have the fish spooky so plan your attack strategy well.

The East Walker River flows have plummeted to 82 cfs which is getting close to unsafe conditions for the fish with high air temperatures. It is best to avoid this area and let these fish rest. Stressing them out by forcing them to expend energy will deplete their oxygen levels fast and many of them will perish. Low water years like these are very tough on the trout in the rivers.

Doug R. guided Ian to some nice ones like this hefty rainbow trout.

Seth guided Patrick and Carter to some big fish like this rainbow trout.

Doug R got Jayne into some chunky fish like this rainbow trout.

Jayne with a nice brown trout.

Jeanne shows of a nice brown trout while fishing with Doug R.

The San Joaquin River in its current state.

Convict Lake is looking very nice this time of year.

Brett shows off a nice rainbow trout while fishing with Doug R.

Young Avery fished with Two Bug Doug and got this nice cutthroat trout.

Trey was guided by Doug Dolan to this beast of a brown trout.

Austin and wife Courtney hooked up off the back of the boat while fishing with Doug R.

Here they display one of many doubles with their daughter.

Young Rylan knocked the fish dead, (they were released alive) while fishing with Two Bug Doug.

Randy fished with Two Bug and netted this beast of a cutthroat trout.

Norm fished with Two Bug Doug and slammed this hell of a brown trout.

Brandon fished with Doug Dolan and got into some acrobatic brown trout.

Two Bug Doug guided Adam to some jumbo fish like this cutthroat trout.

Josh put Katherine on some big ones like this beautiful rainbow trout.

Seth guided Ron to some nice ones like this hefty brown trout.

Check out the lengthy and massive brown trout that Jerry put Robert on.

Josh got Joe on some big ones like this colorful rainbow trout.

Patrick fished with Seth and spanked this big rainbow trout.

Seth got Ted into some chunky fish like this brown trout.

Seth took him to the river where he scored this great brown trout.